Well, I’m near the end of this saga. I washed the plastic chord button assembly and put a little silicone lube in each of the 96 holes. Can you imagine washing the knobs on a receiver with 96 knobs? Typing that reminded me I cleaned the knobs and slider caps on an old Soundcraft mixer that had maybe to 200… Maybe that’s why they called it the 200!

I also took A LOT of it apart last night and a little oil here and there has everything returning as it should. I spent so much time on this I didn’t get to the coupling caps or fuse adding. Will try and do that today.

END_OF_DOCUMENT_TOKEN_TO_BE_REPLACED

When I played the Hammond this morning it was back to happy – doing everything it was supposed to and in tune. I think I’ll just add a fuse and replace the amplifiers coupling caps this afternoon and try and see if I can get the PR-40 into a position where I can connect the two.

Okay so I played it again this afternoon and decided whatever triggers the pedal from the chord matrix was not working correctly. Cleaning the pedal contacts didn’t do anything so I decided to get into the mechanism of the chord matrix. On the Crasno site there is a picture of removing the chord button controls. I took their advice and taped the buttons to the panel so they wouldn’t all go through and end up everywhere. The matrix itself is an impressive mechanism. Whatever the note bars pivot on was hanging up and returning very slowly.

All I did tonight was get it apart then feed the chickens. I’ll do some internet searches and see if I can figure it out before I go much farther.

END_OF_DOCUMENT_TOKEN_TO_BE_REPLACED

There was an estate sale in my neighborhood I spent an hour at (no musical instruments other than an overpriced piano or Hi-Fi audio), a trip to be made to the hardware store for some building materials and trip to the store for dinner makings, so progress was a challenge. In the last set of pictures you can see the shadows are getting long. I started feeling some time pressure to get to it if I was going to have it together before I went to bed, I started rationalizing about at what point I could say I was successful. I still needed to test a bunch of tubes, find a 5U4 and make a power cord. I had to take a break and cook some steaks, but I ran back and forth between BBQ and the project. My dad joked he would hold the flash light. My back was getting tired, so I didn’t relish the thought of not being done by dark. I ate fast, but it was still delicious. Must finish. I decided if it was assembled, and the tubes tested before I went to bed I could take my time bringing it up on a variac and testing stuff the next morning.

END_OF_DOCUMENT_TOKEN_TO_BE_REPLACED

It was only about 9 am when I got back from the dump with this thing so I challenged myself – I will get this thing back together today. My dad thought this was laughable, but that only made me more determined. A lot of wood glue and patience as stuff set up was all it should take to get the wood back into at least functional shape. The waiting for it to set up was the hardest part.

When I was working on it I remembered there was one of these chord organs in Craigslist about 15 minutes from me for a few hundred bucks sometime in the last few months. This must be that organ. I should have called!

There is an umbilical cord of wires between the amp/preamp/control chassis and the voice chassis that is routed through a small hole in a plywood panel. There is no connector – only about a hundred solder joints on either side. I opted to remove this panel by brute force, and I left it off so I could easily take things apart as needed for electrical work.

There are scars from getting pushed out of the back of a truck that just can’t be erased, but I have noticed over the years that if you can make what you have look as good as it can, you will be surprised by the results.

END_OF_DOCUMENT_TOKEN_TO_BE_REPLACED

Took a Trooper (1990 Isuzu) load of crap to my local dump Saturday morning earlier than usual to try and beat the crowds. It’s not a real dump, it’s a transfer station with a few categories of stuff they take including electronics. I usually look around because the guy who runs it and drives the tractor always says “sure” if I want to bring something home.

I got to the spot where people drop off mixed-material stuff for processing – a nice way of saying getting crushed by the tractor so they can sort out the wood, metal etc for recycling. Alone in the middle of that spot on its side with a broken wood side and it’s power supply hanging by a wire was a Hammond S6 Chord organ – I knew exactly what it was – I have a buddy with one in his studio. I looked at the back and it had all it’s 1957 long black plate/ square getter RCA 12AX/12AU7’s, some sweet 6V6GT’s by GE, and some other nice tubes. My first thought was to just grab them but then I was struck by what nice condition the damn thing was in in spite of the harsh treatment of the last 30 minutes that had reduced it from perfectly preserved original to heap.

“Guy just dropped it off – I was walking over here to get in the tractor to smash it.”

Timing is everything I think to myself.

He helps me load it up and I scout around grabbing all the chunks of wood I can and the bench.

As I drive the mile home I resolve to go to the dump as much as possible in the future, and to do my best to put the organ back together. I have been wanting an organ to mess with and play, and now I have one, free but for the repairs I need to do.

If I had been thinking I would have taken a picture at the dump, but I had other things on my mind just then.

END_OF_DOCUMENT_TOKEN_TO_BE_REPLACED

Calibrating and tuning a CS-50 (and I assume the other nearest siblings) is an iterative process.  There are pitfalls at every step, and when you finally reach the end you get a nice easter egg -a tuned 4 (or more) voice synth!  In the last post I quickly diagnosed why my CS-50 didn’t make a sound -having the TU (tuning) voltage jumped to ground.  This post is about other problems.  The CS-50 circuitry has a lot of functions that are distributed among a couple of boards, so you may find you have a tuning problem originating in your SUB board, or a portamento problem originating from your PRA board.  Well, I had a TU problem coming from my SUB board – no matter what I tried, I got 6.5 volts at the TU terminal -trim pots had no effect… this terminal is supposed to be 4.000 volts.  Lots of head scratching and component replacement later I decided to just order a CS-50 SUB board from synthparts.com -a handy side effect of CS-50 voice boards being worth $400 – $500 each, making the CS-50 worth about 2x it’s ‘complete working’ value in parts is that CS-50 specific parts are CHEAP.  I got a complete front panel and lower chassis in like new condition for $150 while I was at it.  Too much money probably, but not bad really if you just want to fix your cheaply obtained synth that just happens to be worth more as parts. 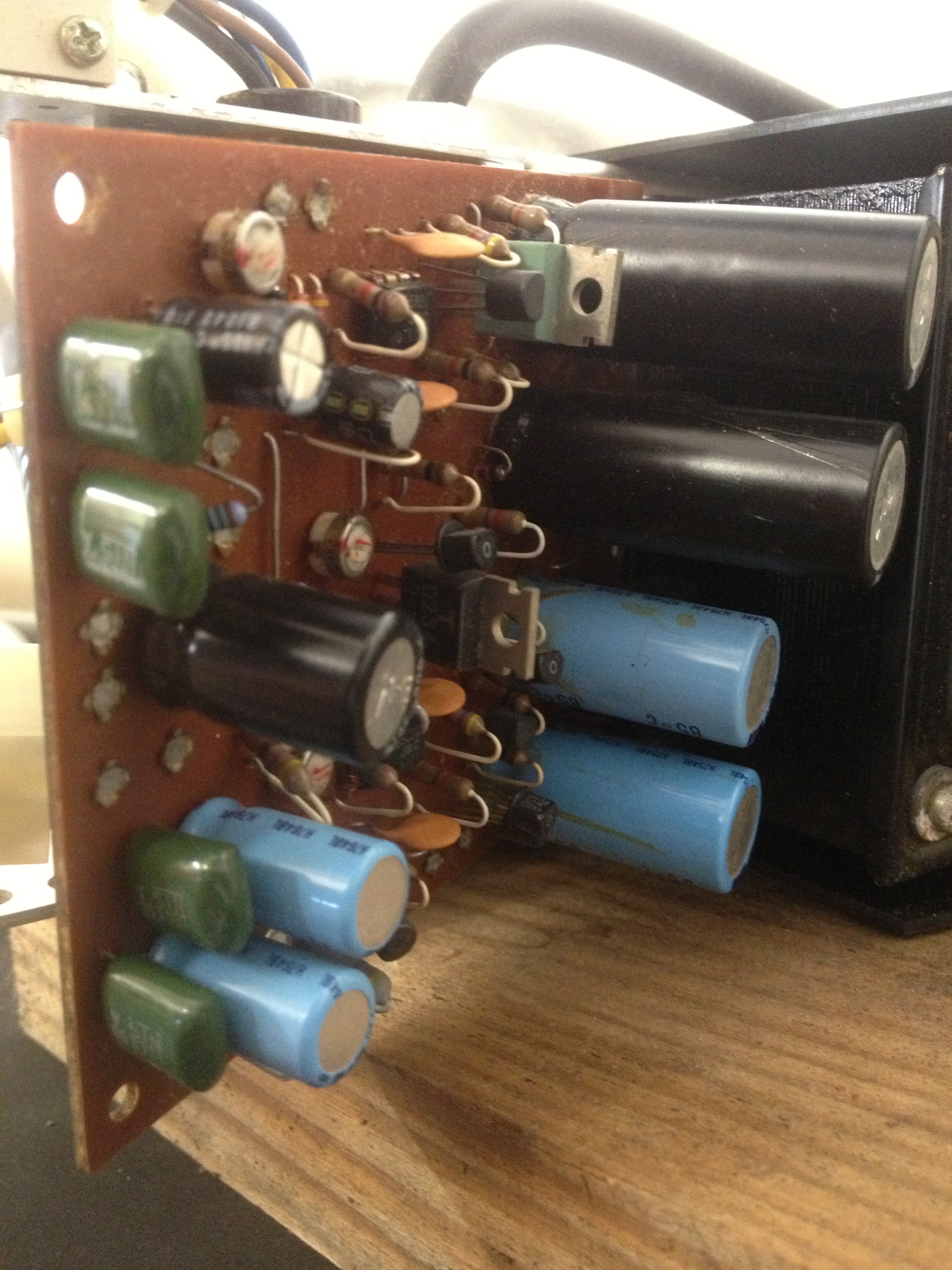 Part way through a power supply recap.  I am told the small value green caps don’t really tend to fail, and to leave them alone.  After the recap it’s a good idea to look at the rail voltages again just in case. END_OF_DOCUMENT_TOKEN_TO_BE_REPLACED

For those mad enough to attempt a repair or god-forbid restoration of their PolyMoog, here is a running list of parts I have/will/need to replace.  This will be updated as I get stuff. 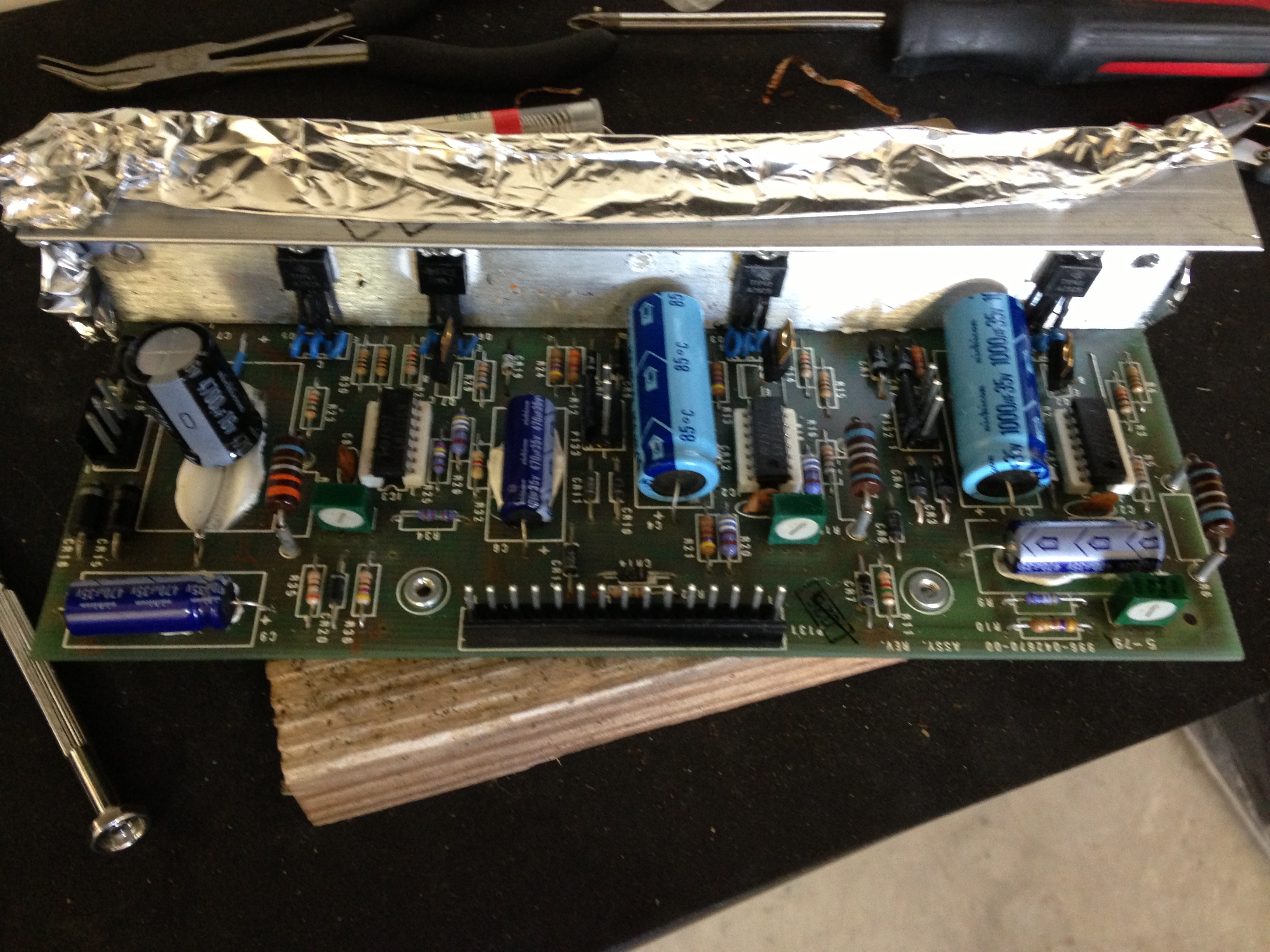 Power Supply has had its capacitors replaced.  Note the 4700uF is a radial -they were out of axial capacitors in the rating I needed.

Few synthesizers have such a bi-polar reputation.  Amazing sounding and tedious to maintain, much less restore are the two poles of this equation.  Moog churned out a few of these – I am guessing a little over 3000 since they started with 1001 and this fellow is serial number 4021.  The reference to the latest one I’ve found is 4141.  Gary Numan famously used the Polymoog (280a I think – Vox Humana most recognizably) and so did a list of other luminaries if VSE is correct, but there isn’t anyone recent on that list.  I’m excited to fix this to see what it can do in a modern setting. 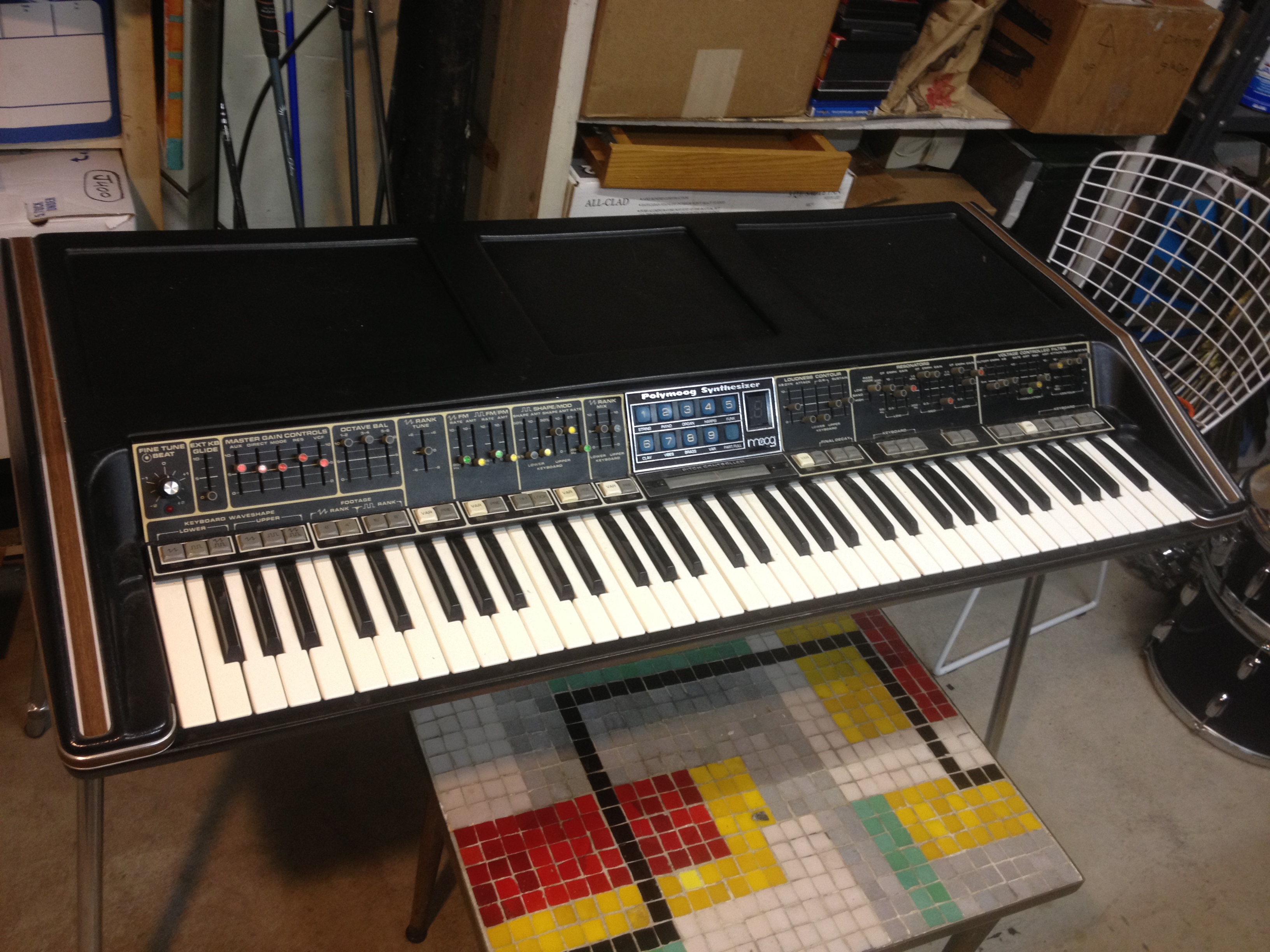 It just happens sometimes.  You mention you have an X you are looking to get rid of, and a friend says they have a Y they’d like to get rid of.  A little cash one way or the other sweetens the deal.  In such a way this complete, clean, low mileage, semi-functional Polymoog joined the menagerie.

END_OF_DOCUMENT_TOKEN_TO_BE_REPLACED

I decided to be ‘one of those guys’ and placed an ad on Craigslist looking for an ARP Odyssey (really want one!!), anyway -responses were thin and expensive except for a ‘broken Yamaha CS-50’.  I went for a look and hey-ho next thing I knew I had a $600 CS-50 in the back of my car.  Considering perfect ones sell for $1200 – $2000, the price was probably high for how little worked on it, but I decided to take a chance since I like a challenge.  It came with a lid and legs. 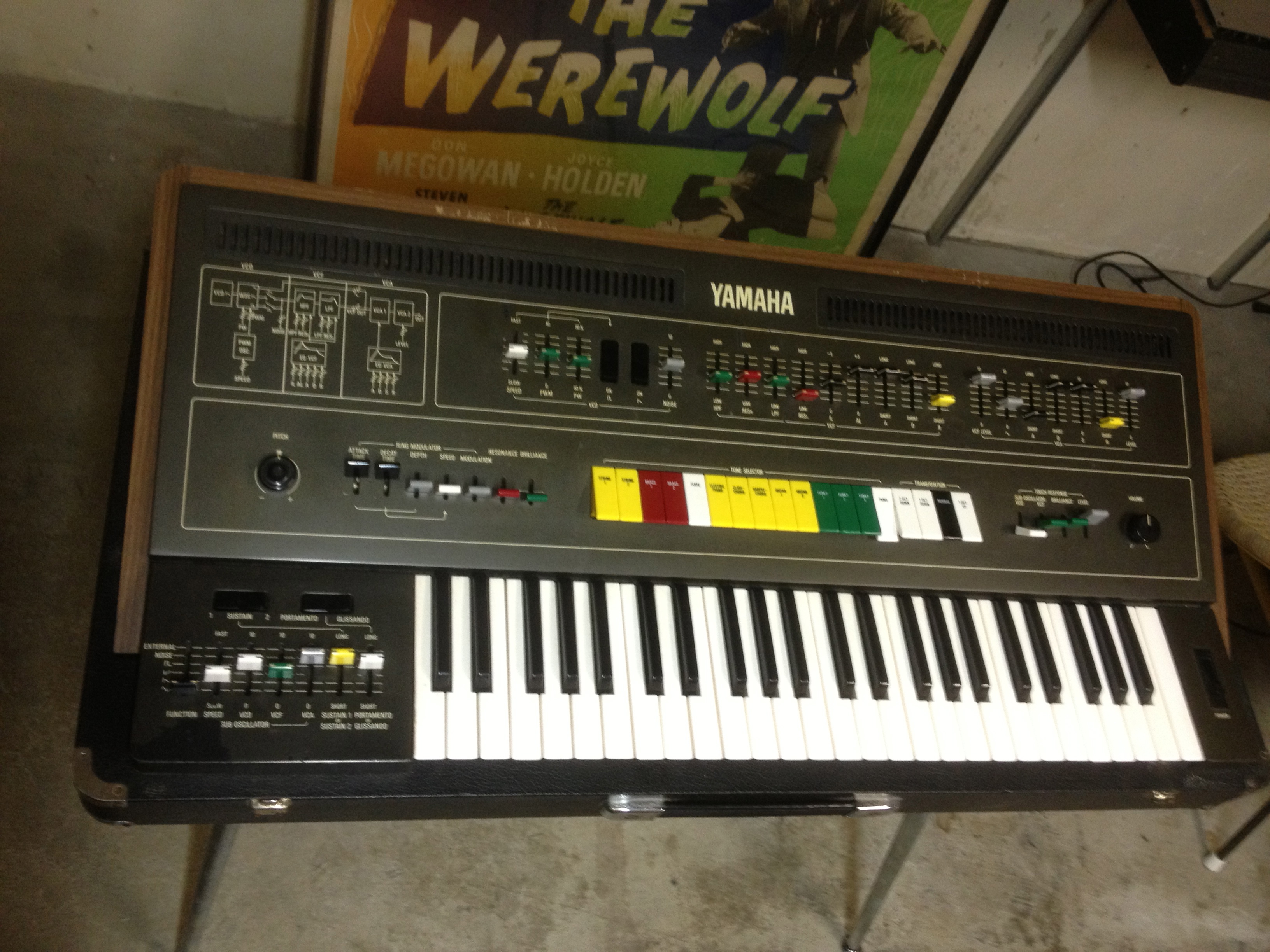 A good looking specimen.  All slider caps are present.  The keyboard is in great shape.  Not too many scratches.  Even came with the legs.  The LFO control board has a bunch of paint loss in the lower left corner -like the PO played with a metal band watch on.

END_OF_DOCUMENT_TOKEN_TO_BE_REPLACED

This is my Moog The Source.  It was a lovely all original piece in great working order.  In a fit of ‘I’ve got too much stuff’ a while back I sold this fellow on eBay and ended up having one of the worst selling experiences I’ve ever had.  I used this synth lightly in the studio and everything worked, even after several hours being on.  The buyer complained about lots of little things that frankly I suspect weren’t there, the aim of which was to get a partial refund.  After two weeks of having the money I got for this tied up in ‘item not received as described’ Paypal limbo I sent the buyer $50 and told them to ship it back.  They used about half the bubble wrap I sent it in and to round out the bad experience it showed up as you can see below. 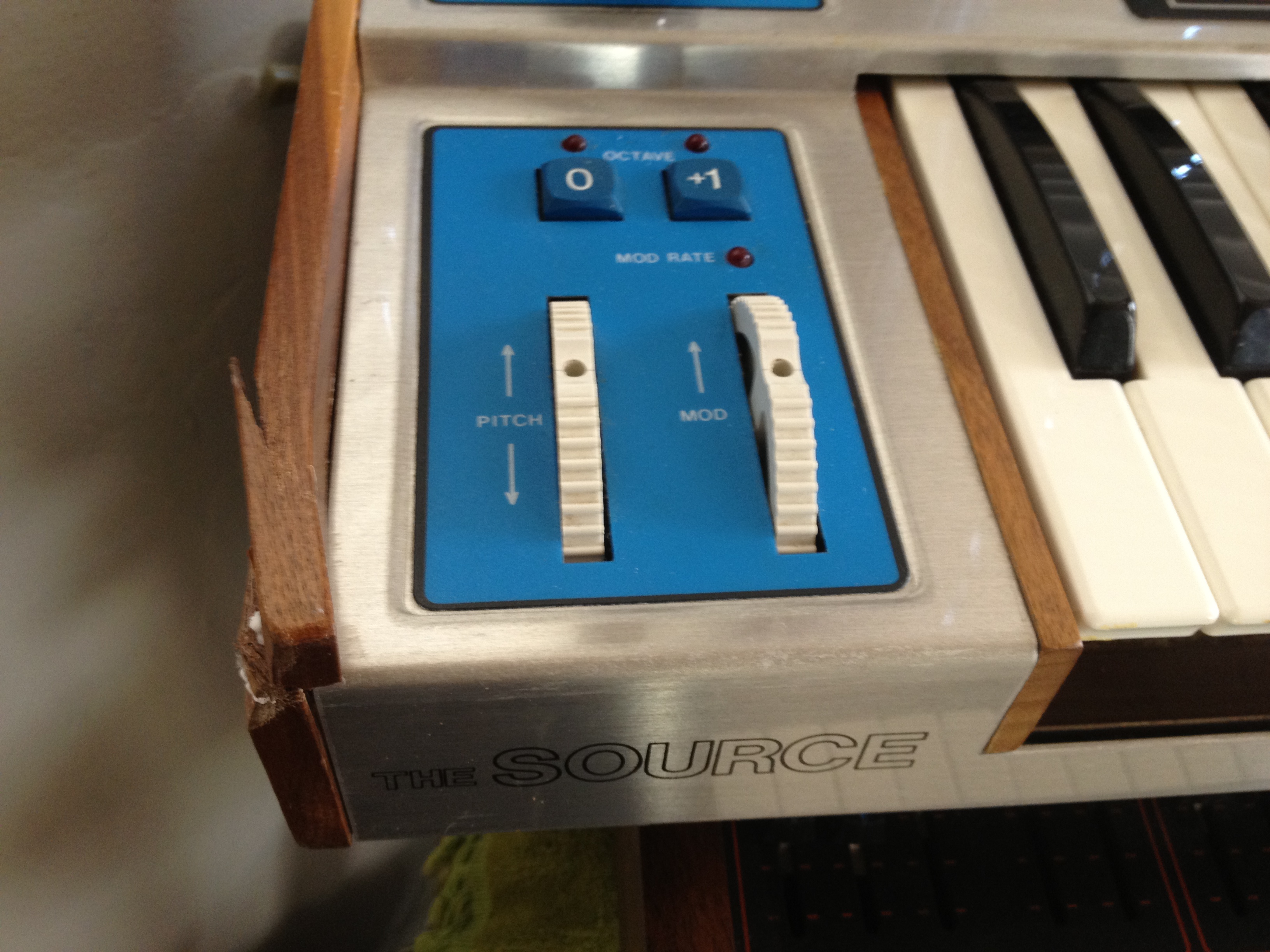