I’m not sure how it happened -but I have two somewhat dead Arp Omni’s hanging around expecting my attention.  I admit -they’ve been getting it, but I haven’t been thrown much of a bone in return yet.

Unit 1: the silent type.  Got it pretty cheap on eBay when there were several broken ones on there at the same time.  I completely recapped it but it persists in its’ silence.

Unit 2:  Not quite as cheap but also not the silent type.  Lots of bleed through from bad capacitors, but most of the functions sort of work.

Who is who?  Look at the capacitors.  Complicated beasts these Omni’s -all out of proportion to their street value.

The problems are all basically the same -bananas that have turned brown, bread that’s moldy or -capacitors and CMOS chips that have self destructed.

So what have I done?  About 150 capacitors, 4 or 5 IC’s, and basically no audible progress.  Basically?  Most recently I had the silent one working great so the problem is probably a ground issue.

The sliders on Omni’s are as problem prone as the tantalum capacitors and for all intents and purposes disposable, but if you are careful you can remove/disassemble/clean/lube/reassemble them with not much work.  They’re more complicated and robust looking than Roland sliders, but less reliable.  I wonder why? 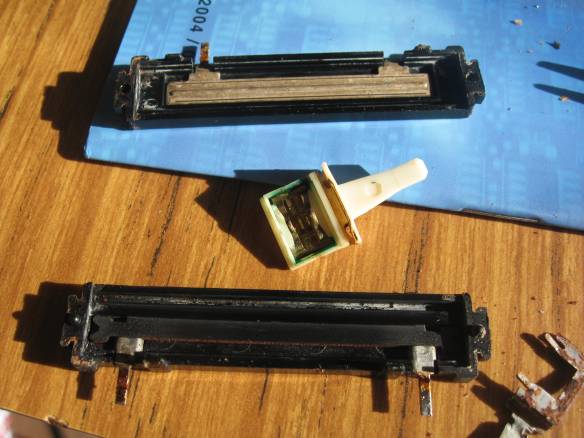 These are the guys that hold the slider together.  You have to bend the tabs at the end of the openings away from the plastic slider.  These tend to break, rendering the unit worthless or so.  The big parts go through the PCB and get twisted to lock it to the PCB.

There they are, both bendable parts ready to break on cue.

So where am I now and what’s next?  I have had both working at about 90% in turns -seemingly fine one moment and then silent the next.  I think it’s a grounding issue.  Hopefully I can find the short…

3 thoughts on “Arp Omni heaven -or, er, quite the opposite”