The power supply board seemed like a nice place to start since it’s small, really dirty and needs a lot of attention. First order of business was making a sketch of which wire went where coming out of the transformer since I had to cut these wires to separate the transformer from the board.  I also took a bunch of detailed pictures of the plugs and wire bundles so I’d be able to plug everything back in when it’s time for reassembly.

I read with interest a post about Arp Omni sliders that described a process for cleaning them without removing them from the boards.  It involved washing the boards in Simple Green, rinsing them in distilled water and thoroughly drying them.  I did this on my Omni 2 and it came out great, so I used the same process on this power supply board.

Looks damn good now.  All the barf is gone.  The plug pins are all clean and shiny.

Even though it worked, I decided since I had it out and all that I would install new capacitors.  $13 later I was home with a little paper bag full of capacitors.  30 minutes later it looked like this: 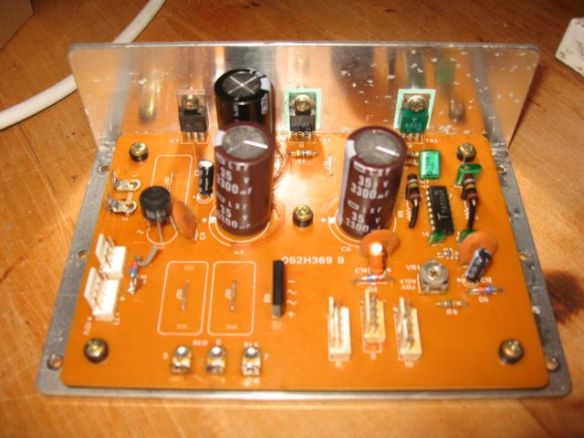 Not too bad.  I even removed the little cut off wire ends that were soldered to the connectors.  Ready to have the transformer leads soldered to it then be installed.

I got a new pitch bender from Brandon on the VSE forum in the mail while I was doing the power supply board, so that became the logical next job.  All that’s wrong with the one that came with the Juno is the tip is broken off.

Here it is all apart ready to be cleaned up.  You’ll notice I already moved the bump stops from the old bender wheel to the new one.  The rubber was splitting so I Super-glued them in place.  The two black things above the spring are the halves of the bump stop in the center.

Here’s the big bump stop Super-glued to the post it lives on.  That screw is the set screw for the pitch wheel and the washer and nut hold the pitch pot in place.

You can see the bender wheels are not exactly the same.  The shoulder the spring lives on is longer on the old one.  Will work -no big deal.

That’s why the new wheel wont slip onto the shaft -there’s a bunch of plastic in the hole that got pushed there when the set screw hole was drilled.  I used an Exacto knife to get most of it then ran a screw driver through it a few times.

The bender assembly was free floating under the cover and these wires all got pushed together.  You want to look for things like this when you are putting a synth together.  Tracing a problem caused by something like this can make you crazy.  I just bent the leads so the wires each had plenty of breathing room.

Here it is all happy-happy.  Feels nice and tight.  I added heat shrink around the three rubber bumpers to help keep them together.  There’s about 5 degrees of free play in either direction before the bender engages the return spring that I am going to figure out a way to remove so it has a nice progressive feel and centers perfectly when you let go of it.  Need to track down 2 black oxide finish M3 button head screws to mount this to the panel.

Up next:  Switches, buttons and knobs -oh my.

Part one is here.